Chiropractors of the Year

2020 Blair Chiropractor Of The Year 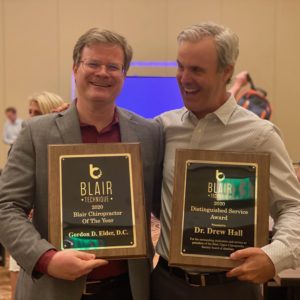 Dr. Elder’s first chiropractic experience was at the age of 10 at the hands of Weldon Muncy, DC, Dr. Blair’s co-developer of the Blair Chiropractic Technique™. It wasn’t until many years later that he decided to pursue a career as a Blair Chiropractor after he saw the changes the Blair technique made in his wife, who went from being a semi-invalid to a group exercise instructor and personal trainer.
Dr. Elder learned what the Atlas was by attending Blair seminars even before he got to chiropractic college. The doctors he considers his mentors are: Weldon Muncy, D.C. – Dr. Blair’s co-developer and instructional successor, Fred Harkins, D.C. – who learned the technique from Dr. Blair personally, David Topping, D.C. – Dr. Muncy’s chosen instructional successor, and E.A. Addington D.C. – Dr. Blair’s last student and clinical successor.
Dr. Elder graduated from Cleveland Chiropractic College, Los Angeles in December 1999 and has been a full member of the Blair Society ever since. He has been an Advanced Instructor since 2013 and has since helped the Society develop a structured technique certification program. In 2017 Dr. Elder closed his Southern California practice and moved his family to Lubbock, Texas to take over the original Blair Chiropractic Clinic established by Dr. Blair in 1949. He is currently enrolled in the Diplomate in Chiropractic Craniocervical Junction Procedures (DCCJP) program.
Dr. Elder served as the President of the Blair Society in 2020 and currently serves as the Society’s Vice President. He has one wife, 4 adult children, and a yappy dog.

Blair Chiropractors of the Year

2006 Dr. Scott Matz (Special award for contributions to the growth and expansion of the Blair Technique, Dr. Weldon Muncy)

2008 Dr. Darren White. Special award for contributions to Upper Cervical awarded to Billy and Cristina Barretta, producers of The Power of Upper Cervical.